6 Weeks of the Work

6 WEEKS OF THE WORK 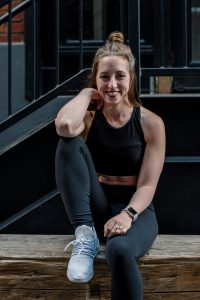 I am so excited to be partnering with NBA professional basketball trainer, Amoila Cesar for a brand new fitness program, 6 Weeks of the Work. This program is NOT for everyone! I’m looking specifically for athletes, former athletes, personal trainers, or someone who has been working out consistently who is up for a CHALLENGE! Our team is full of fitness lovers and you’ll fit right in with our community if you tend to say things like “I wish I could just workout all day” or if you get done with a hard workout and love saying “WHAT THE F JUST HAPPENED.” You probably also like when sweat drips in your eyes or you lay on the ground not being able to move after a workout… yeah we’re a weird group but YOU GET IT.

Here is a preview of the workout!! There is explicit language but a clean version will be available too!

Amoila is a NASM and NCCPT certified personal trainer with clients ranging from pro athletes to celebrities to regular, everyday people. He received his bachelor’s degree in exercise science with a minor in psychology from the University of Central Florida. He is LEGIT and this is going to be HARD AF – excited yet?!

6 Weeks of THE WORK is cutting-edge functional training designed to help you build real-world strength that translates beyond the gym. In six weeks, you won’t just be leaner, but you’ll also be stronger, more agile and mobile, and see improvements in your performance in everyday life—all while strengthening your mental game.

You’ll focus on six training elements: strength, hypertrophy, endurance, power, agility, and mobility. There are 36 workouts packed with challenging compound lifts, agility drills, cardio exercises, and mobility moves—all designed to help you get in incredible shape in record time. It’s going to be one of the toughest programs you’ll ever take on. There’s even a Fit Test to make sure you’re up for the challenge. But, it’ll all be worth it, because in six weeks you’ll see results you never thought possible…and have a lot of fun in the meantime cause that’s how we roll!

If you’re like me.. you love the gym but you aren’t always quite sure what to do to get the BEST RESULTS. I could walk around the gym for hours..but having a program to follow and know exactly what to do is what CHANGED THE GAME for me.

Get to know more about Amoila here:

DOWNLOAD THE FIT TEST HERE TO SEE IF YOU ARE READY FOR THIS PROGRAM!:

THE TOOLS YOU GET:

How is nutrition integrated into 6 Weeks of THE WORK?

What you eat is just as important as giving every workout your all. So you’re going to have to do THE WORK in the kitchen, too. This program includes the Beachbody Guide to Nutrition which contains delicious recipes, expert nutrition tips, and dietary guidance designed to optimize both your workout performance and your progress toward your goals with 6 Weeks of THE WORK.

However, if you want a crazy-good transformation, it’s highly recommended that you follow a more in-depth eating plan like 2B Mindset or Ultimate Portion Fix (both sold separately). Under Nutrition in the Program Materials tab, you’ll find PDFs that show you how to combine either of these two programs with 6 Weeks of THE WORK to achieve your very best results.

And because these workouts are physically demanding, your guide also shows you how to integrate Shakeology® and Beachbody Performance® supplements into your daily routine.‡ Meticulously made with as many as 60 globally sourced superfood ingredients—including proteins, digestive enzymes, prebiotics, probiotics, fiber, and antioxidants—Shakeology is a nutrient-dense shake that can help you feel your best as you challenge yourself daily with tough workouts.* Your guide also shows you how to help optimize your workouts with the Beachbody Performance line. Beachbody Performance Energize, Recover, Hydrate, Recharge, and Creatine are strategically formulated with key ingredients that help support energy, recovery, hydration, and muscle building.*

As always, I will be hosting a group in my Virtual Gym (or an online accountability group) to motivate and support everyone who joins me! We call our community the #chooseeverydaymovement because we focus on the CHOICES we CAN make everyday! We choose our own happiness, we focus on our fitness, nutrition, and positivity and make amazing life-long friends along the way.

The groups are done in a private app, which allows you to log your workout and superfood shake each day, upload your progress photos, and track your measurements. So everything is done in one place and I can see what you are logging and keep you accountable and on track! 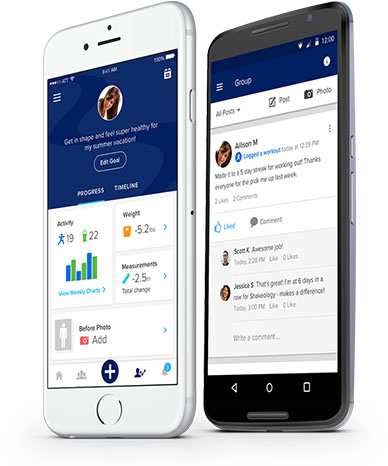 I post every day (a fitness tip, wellness tip, recipes, motivation, etc.) to have that team feel! So in addition to the fitness component, we dig deep and work on the emotional aspects of the transformation too. We all support each other and cheer one another on, so there’s a great community and friendship aspect as well! The group and my 1:1 support is free. You just purchase your package through me! If you were an athlete in high school or college I know what it feels like to miss that team atmosphere .. THIS gives you a TEAM back again!

DO I REALLY NEED SHAKEOLOGY OR THOSE OTHER THINGS?

Keep in mind that the transformations above didn’t come from just doing half the program. ALL of those people committed to the whole shebang and that’s what I’m recommending because I want YOU to get the best results!

WHAT ARE THESE THINGS? 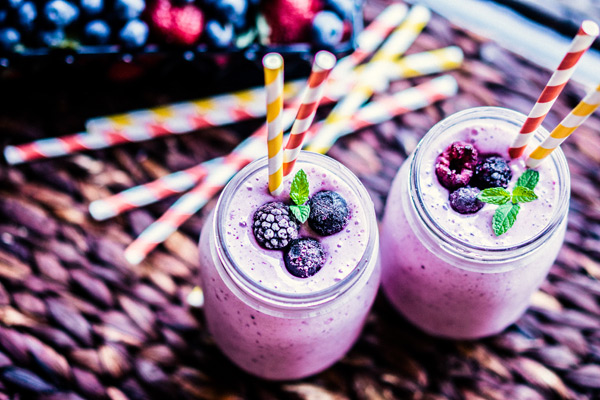 >>>SHAKEOLOGY is a superfood powerhouse designed to deliver your entire day’s worth of nutrients! It’s made from over 70 whole superfoods from around the world and will replace a meal, vitamin, and probiotic each day! It will give you a natural energy boost, lower your cholesterol, reduce blood sugar levels, curb cravings, keep you full, AND improve your hair, skin, nails, and digestion (aka keep you regular)! 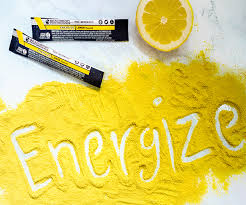 >>>ENERGIZE is the pretty drink that gives me LIFE! I call it my “dance party pre-workout” because it is AH-MAZING! It gives me a great little energy boost without the jitters! It comes in Lemon or Fruit Punch and is literally one of the main highlights of my day! It’s also a good little 2pm pick me up for those office days!

OBSESSED WITH THIS SCIENTIST’S VOICE! THE SCIENCE BEHIND ENERGIZE 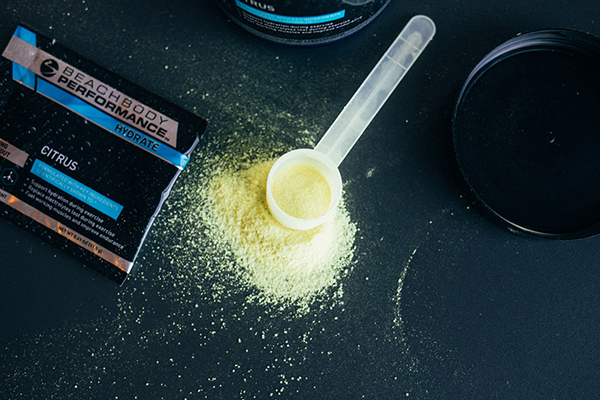 >>>HYDRATE is an all-natural, healthier form of Gatorade! It’s perfect for replacing electrolytes during a tough workout…and it doesn’t have any artificial crap in it! 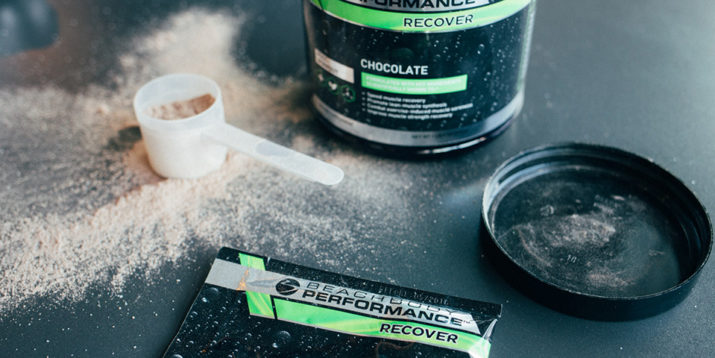 >>>RECOVER is the post workout drink that prevents your muscles from getting sore. It replenishes what you lost and helps to rebuild and repair your muscles so you aren’t too sore to press play the next day! Plus the chocolate tastes like a wet brownie and the orange tastes like a Creamsicle and is freaking delicious! Tyler is constantly sneaking scoops of mine.

With a program this demanding, you’re going to need to up your protein intake. Recover and Recharge contain high- quality proteins and phytonutrients that can help decrease post-workout muscle soreness and support your body’s recovery.

>>>POWER GREENS is made from cucumber, kale, celery, matcha, spinach, and chlorella (a form of algae) {YUM! lol}. Each serving has the equivalent to one cup of green veggies — with no artificial colors, flavors, sweeteners, or preservatives. I’ll be honest, it’s gross alone lol but in my Shakeology I can’t even taste it! If you struggle to get veggies in or are nutrition obsessed like me, this is great!  I use this EVERY day and it’s part of the “Jericho pack” below because she loves it too! And I’m like: I’ll take whatever Jericho’s having if it gives me that hair!

>>BEACHBAR A snack bar that has less sugar than Clif bars or Kindbars (I used to eat both!) and now I only eat these! I keep a few in my car for when I get hangry lol! It’s the perfect snack to have around and fits right into the meal plans! They come in Peanut Butter Chocolate and Chocolate Cherry Almond.

WHAT ARE THE PACKAGE OPTIONS?

We have different options depending on whether you are a NEW customer or a CURRENT customer! Read on!

NEW CUSTOMERS, CHOOSE FROM THESE OPTIONS: 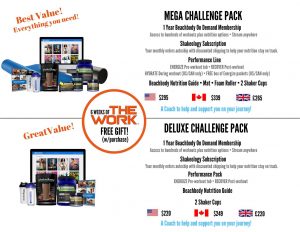 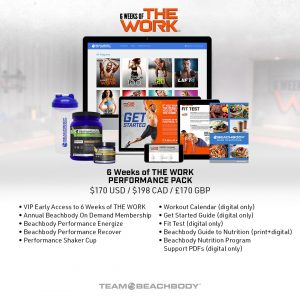 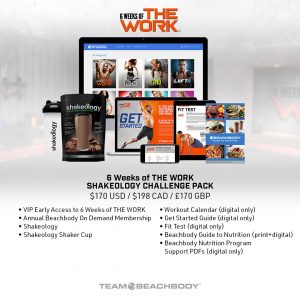 Just another way to compare all 4: 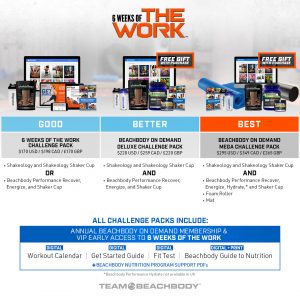 CURRENT CUSTOMERS WHO DO HAVE BEACHBODY ON DEMAND, CHOOSE FROM THESE OPTIONS: 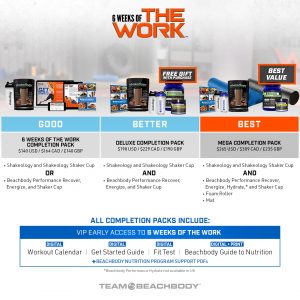 Need equipment? Let me know and I’ll add on what you need! 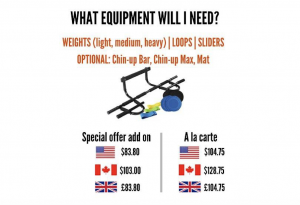 Want to add on a NUTRITION PROGRAM – Ultimate Portion Fix or 2B Mindset? Include in your email that you want to go all-in with nutrition too (I definitely would recommend as nutrition is 80% of results!) and let me know and I’ll send bundle options!

Email me back your thoughts, any questions, or which package you’d like and let’s do this!!